This J-2 Taylor Cub was the first airplane flown by Major General Marion Carl USMC. General Carl soloed in this aircraft at the Corvallis, OR airport. In the course of his flying career in the Marine Corps, he flew 14,000 flying hours in 260 different types of airplanes, helicopters, and rocket planes. General Carl was born in Hubbard, OR and graduated from Oregon State University in 1938. He was in combat all the way through Midway Island, Guadalcanal, and many of the major air battles in the South Pacific and in Korea. He was the first pilot to land a jet fighter on an aircraft carrier. He once held the record for highest altitude flown and speed records.

After the war, General Carl held many high positions in the Marines including being a test pilot. He retired in 1973 and moved to Roseburg, OR where he died in 1998. During his service, he was awarded the Navy Cross with Gold Star, Legion of Merit with Combat "V" and 3 Gold Stars. He was also awarded the Distinguished Flying Cross and the Air Medal.

The Oregon Air and Space Museum will be dedicating a section of the museum to General Carl. Please check back for updates and visit the Museum to see the exhibit in progress. 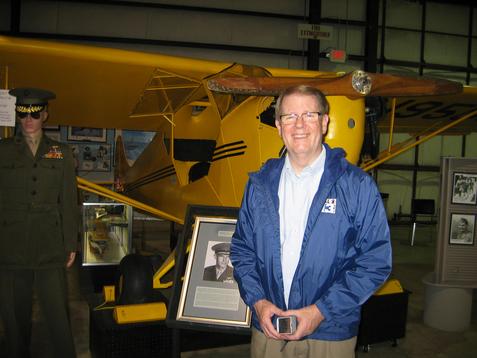 OASM is one of the 3 best landmarks in Eugene!
View on Mobile